When Should I Have an Irrigation Blowout?

Irrigation blowout… What is it, when should I have it done, and can I do it myself? These are all common questions homeowners have with an irrigation system or drip irrigation system. So let’s tackle each one of these questions separately.

What is an irrigation blowout?

An irrigation blowout or a sprinkler blowout is basically winterizing your sprinkler and irrigation system. It’s exactly what it sounds like. Before the water in the sprinkler line freezes, it’ll need to be blown out or eliminated so that it does not freeze the pipes and ruin your irrigation system.

What happens if the water freezes inside of an irrigation or sprinkler line? 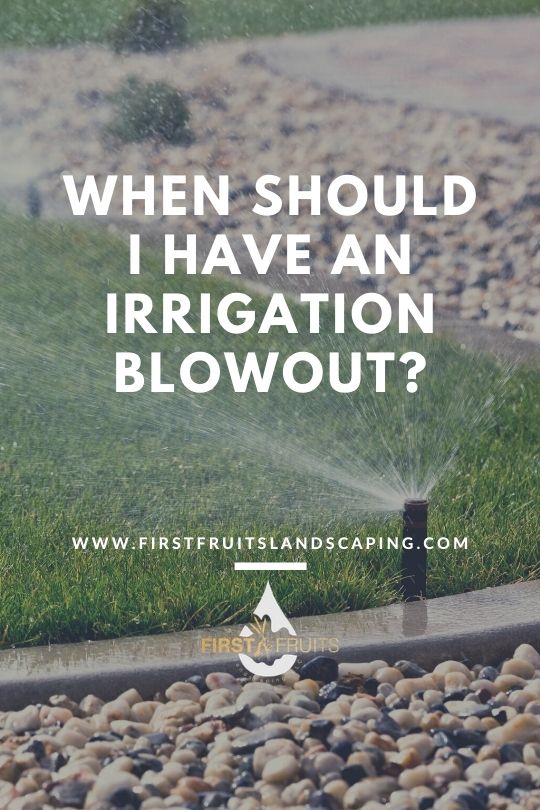 We all know that when water freezes it expands and there are several components in an irrigation or sprinkler system that rely on small plastic parts to allow it to do its job. Added pressure inside these lines can cause them to break and burst and because many of these lines are underground, it can end up in costly repairs.

A blowout method utilizes an air compressor with a cubic foot per minute rating of about 80 to 100 for any mainline of 2 inches or less. This will clear out the line of any standing water and winterize the pipes for the season. Winterizing your irrigation system or an irrigation blowout will take care of this but it’s also important to know when to do this.

When should I schedule an irrigation blowout?

Here’s the biggest myth… A lot of people are scheduling their irrigation blowouts and now which is not a good time to do it. Consider this week alone; were getting temperatures in the upper 70s and it’s going to be dry, which means you probably want to still water your lawn to keep it green throughout the fall months. If you schedule an irrigation system blowout now, you may have to do it again should you want to use your sprinkler system.

In the Pacific Northwest we have Indian summers, meaning we have warmer weather sometimes into November, so choosing to blowout your irrigation system now, may mean having to do it again come November. This is why I say that now is a good time to schedule your irrigation blowout but not until the first week of November.

You really only want to be concerned when it starts to get freezing out and we don’t get those kinds of temperatures until the end of November or even into December and January. So conducting a blowout now is really kind of pointless. There’s no reason to do it before November or until the weather really starts to turn permanently. If you still have window air conditioners up, it’s not the time to schedule an irrigation or sprinkler blowout.

At First Fruits Landscaping we offer certain packages that can winterize your entire yard as well as your irrigation or sprinkler system. To have the perfect dormant lawn or yard throughout the winter we have a package that not only clears out the irrigation line preparing it for colder weather but we provide a winter lawn treatments as well. Get everything done at once and then you won’t have to worry about it until next March.